I think I will open my blog with a small memory of my father each posting.  It is my memorial to him.

Memories of my Dad:  Dad told me once that he thought he had OCD—obsessive-compulsive disorder.  He liked the show Monk for that reason.  He insisted that his need to count things was an indicator.  I remember him counting the steps in Grandma’s house—seventeen from the living room to the second floor on the front staircase, sixteen on the back stairs.  Fourteen from the 2nd to the 3rd floor. He used to take them two at a time, both up and down, running.

Yesterday we left Fairfield, saying our goodbyes to Cindy before heading out to the Maharishi Vedic City Organic Farm, and the Vedic City itself. We drove beneath the auspices of a corrugated watercolor sky.  I have to admit I was a little disappointed—but this near-winter-like weather is not a good time to see and photograph a farm.  Also, I stopped to visit the Maharishi Vedic Observatory, a giant sun-dial of structures that indicate the positions of the planets and stars.  Unfortunately, it is behind a white metal fence, so it is impossible to photograph it up close, and there is no place to look at it from above--the building next to it has no observation deck!  So, while it may be an impressive monument, it is impossible for the visitor to truly  experience it.  You'll get a better view of it online.

The woman I was supposed to meet at the farm was not able to get there when I was, but she gave me permission to take photos.  There was really no one there to show me around, so I simply walked about and took pictures of the greenhouse and the windmill, and the goats.  Obviously the fields were bare. 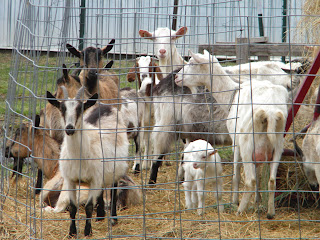 We saw the houses of Vedic City—nice little homes sitting on the prairie, with baby trees (I assume they are the future fruit trees of this permaculture community).  But again I didn’t see much evidence of the food-producing aspect of the homes.  I do know that they are entirely off the grid—I hope one day to be able to live in a home off the grid—but please, not on the prairie!

Then we headed back into Fairfield and then east toward Burlington.  We saw a bald eagle swoop down and close to the car at one point. Also on the way, we saw two unusual things:  a herd of reindeer grazing like cattle, and a llama running.  The llama was golden and wooly, and he looked so funny and alien and wild.  He was running full-tilt, stretching his long neck and gathering his diminutive legs beneath him before bounding on.

Eagle tells us to take advantage of opportunities soon.  There will be a new beginning in a positive direction.  We are instructed to rise above the mundane to see the greater picture.  There is spiritual awakening here, a greater connection to the divine, and increased creativity.

Llama indicates that although the journey has been a long one, you are almost there. Volunteer.  You’re on solid footing (even running).  Take more time for yourself and your needs, and seek out the company of people who share similar interests “rather than spending so much time alone.”

Reindeer are the equivalent of Caribou, which tells us to act with resolve.  “The long emotional and spiritual trek you’ve been on is about to conclude; and once it does, you’ll reap the rewards, benefits and pleasures of having done it.”  If something is bothering you, change it, leave it behind, or surrender to it.   Seek out like-minded people and enlist their support for success. (These interpretations are from Animal Spirit Guides by Stephen D. Farmer, Ph.D.) 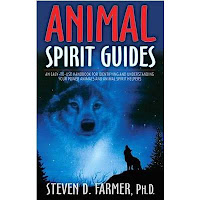 In Burlington, we visited Snake Alley, the crookedest street in the world, according to the Guiness Book of Records.  Rick parked about a block away because we didn’t want to get the RV into a position of not being able to backup or turn around, and I walked toward the alley.  It is in an old, regal neighborhood, climbing a steep, block-long hill between an old home and a church. As I walked toward it, I asked a man in a truck at the stop sign if he had just driven it.  He said no, but as it turns out he was the office manager at the church.  Bill, of the First United Church of Christ, acted as a mini-guide to the alley’s history, and took my picture for me.  He also showed me Cobblestone Alley, another historic street not half a block from Snake Alley.  As it turns out, he attended Camp Curtin Junior High School in Harrisburg around the same time my father graduated from John Harris High School.  Small world. 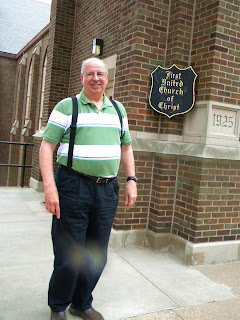 I will post all the pretty pictures in the next post--the photo essay.

We drove the Great River Road from Burlington to Wapello, but it was not the pleasure excursion I had hoped.  There is almost no shoulder, and the passenger side of the northbound lane is almost consistently an 8-20 foot drop into a ditch.  The RV lurches a lot, especially on curves. The road is curvy, with narrow bridges and being a novice RVer, I was more petrified than pleased!  Once my adrenaline starts, it sometimes takes hours to stop, so at Wapello, I got us onto US 61 north, a highway with real shoulders at least.

We ate at the Main Street Diner in Wapello—and were served very healthy portions of quite good food.

We arrived and parked at our friend’s house in Eldridge and today he and Rick worked on the repairs to our blackwater tank.  Maybe by tomorrow, I’ll have my own private bathroom again!

On Thursday, Friday and Saturday, I want to be at the West Kimberly Mall—an indoor flea market, and we plan to move to Scott County Park for the weekend.  This way, the kids can come and visit for my birthday (and granddaughter, Drom’s birthday)—you know, campfire, songs, hot dogs, s’mores for the kids.  Assuming, of course, it's not STILL raining.

On April 26. we will be returning to Fairfield to for a book-signing at Revelations Café, followed by a workshop on Friday after the Farmer’s Market.  It feels good to keep busy.