Our third day in Eldridge.  Spent the last two days moving out here, and re-organizing the interior of the RV.  It rained a little night before last, enough to check that my tarping of the rear cargo carrier kept the important things dry. 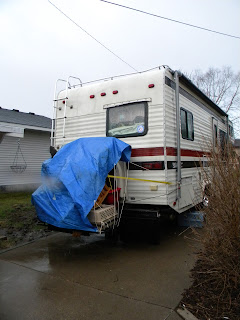 I eliminated probably another 100 pounds of stuff—mostly by going through my clothing choices.  Choices that were made 10 months ago, when this was supposed to be a two-year excursion, mostly far away from our storage units.  What made sense then—indoors with this plan in my head—makes little  sense now, so most of the “warm” clothing for winter and bad weather has been relegated to storage, as well as many redundancies like electrical cords and bathroom supplies.

When we arrived, there was a Kokopelli symbol to greet me—on Mary’s jacket in the kitchen.  I took it as a good sign that we had come to the right place for our beginning.  James and Mary have been very cordial and tolerant of us, and I hope we haven’t been too much of an inconvenience. 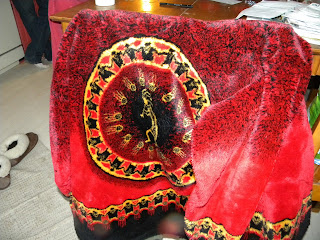 Rain came in the night, cascading like marching waterfalls, wave after wave of warrior water, a battle of the season’s change.  April showers.

I woke around 5:30 AM, frightened, feeling isolated, almost trapped.  We’ve done it, I thought, and felt adrift, lost at sea, panic poking at my heart and belly and lungs.  Prayer helped ease the anxiety, and around six, I was driven from bed by the list of things to attend to—and the need to write a blog entry.

This past week has been nothing but work—hard work, physical work, and my body is screaming at me.  My neck is objecting to the cramped sleeping quarters, my back says it doesn’t want to lift another thing over five pounds, and my right arm tendonitis (elbow and forearm) is throwing a screaming hissy-fit.  I try to placate them with Ibruprofen and the occasional hydrocodone.  I simply have no choice but to keep on.

After my fearful awakening, I asked myself if I wanted to be here or be back in the house, interminably waiting for something to let us move forward.  The thought of that empty, echoing, bereft house was enough to drive me from bed, determined to push through any untoward emotions.

Last week was spent in last minute packing and re-arranging of items within the RV.  Each day brought a new discovery—where the cat bowls should go, how to keep things neat, where and how to stow tools.  So, each day brought a new approach, a tweaking to our methods.  I suspect this learning curve will continue for some months to come.

Friday, we moved the last of the things from the house to storage.  Our friend’s nephew, Eggy, was helping Rick to load our little Rubbermaid tool shed onto the roof of the Explorer.  As Rick stepped down off the rear of the vehicle, his weight nudged the vehicle just enough to make it jump from park, and the car began to roll down the hill.

Our friend, Hutch and I were in the RV when Hutch said, “Momma, I think Rick’s truck is moving.”  I looked out the front window and I saw tall Eggy holding with all his might onto the back of the Explorer, trying with sheer strength and force of will to stop its downward flight.  Rick was running alongside the moving SUV, trying to get into the driver’s seat.  I hollered and exploded out of the RV, running as fast as I could, thinking if they could slow it down, I could jump in and stop it.

Rick had the driver’s door open now, and the vehicle was picking up speed.  He grabbed the steering wheel and managed to get his left foot inside the door.  Now he was hanging from the side of the Explorer, like a cowboy wrestling a bull, hanging just inches above the ground.  I was terrified he would fall and the rear wheel would run him over.  Because he had hold of the steering wheel, the vehicle turned to the left, toward a telephone pole.  I feared the worst.

Then, miraculously, the vehicle came to a stop, just inches from the curb.  Rick was still hanging out, but he had managed to get his foot on the brake.  He pulled himself up into the driver’s seat and put it in park.  Eggy and I caught up to him.  He was laughing—his natural good humor and optimism shining joyfully in his face (his safe face!).  Eggy and I hugged him and cried with relief.

Of course, it was our own fault, loading a vehicle facing downhill, without the parking brake on and the wheel were not turned into the curb as they should have been.  But thank Rick’s guardian angels for protecting him and us once again.  Rick says he’s been “keeping my guardian angels busy since 1962.”  I’m going to buy him a t-shirt.

Also on Friday, I woke with the premonition that we HAD to leave the corner of 13th and Scott today.  It was nice weather, and the first weekend of spring.  I had a bad feeling about what might happen if we were sitting out on the street like that, an open target of hoodlums and shooters.  We had to go.

Sure enough, we learned that over the weekend, there was a police stand-off with shots exchanged on our corner.  Police with guns drawn walked the neighborhood, looking for an armed suspect.  Who know what might have happened if we had been there?  Thank God I listened to my intuition.

Today, I am going to attempt to make some sense of my files and paperwork for Psycards.  Perhaps I can eliminate another 40 pounds of cargo...