Part of developing your intuition is listening to your body and your instincts about your body.  I often find that some of my earliest instincts have been proven right, even though they were culturally unfashionable at the time.

Our feet are an important way in which we stay “grounded” and connected to the earth.  The feet have chakras that help us release negative energy into the earth where it can be recycled.  The relationship we have with our feet—and as a matter of course, our shoes—can affect our entire energy balance, as well as our biological well-being. 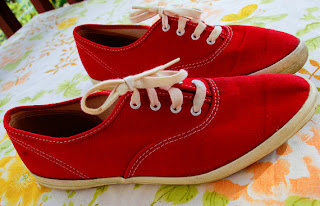 When I was a kid  in the 1960s, we had sneakers—Keds were my favorites.  They weren’t very restrictive, just a soft canvas shoe with a thin layer of rubber and a small arch support.  I confess, I loved my Keds because I thought they were cute and they looked pretty on my feet.

I discovered, too, if I ran with the balls of my feet, I could run faster.  Especially if I was barefoot.  It was like flying, dancing over the moving ball of the earth, connecting and pushing it beneath me.  I wasn’t really propelling the earth, but it still felt like magic.

When I was a teenager living at the Jersey shore, I spent nearly all summer barefoot or in flip-flops for the days when the beach sand was too hot to walk on directly. (My winters spent shod softened and sensitized the soles of my feet.)  I also had vivid psychic experiences at that time and felt a deep connection to the earth and its movements, as well as the rhythms of the sea as they echoed deep against the shore.

When my oldest child was born, I let her parade around barefoot as much as possible.  My reasoning was this:  children have been barefoot for millions of years and managed to learn to walk.  I felt very deeply that this was the “right” way to be—unshod whenever possible, that God made feet to work just fine without shoes. 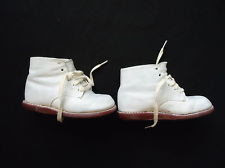 When my daughter was learning to walk, my mother-in-law sent us some money to buy orthopedic baby shoes.   You know—those hard white leather shoes that often end up being bronzed.  (They may as well be bronzed to start with!)  I had memories of those shoes from my own childhood.  They made my feet hot, and they rubbed the bones on my ankles and heels and made blisters.  They also made my silky ankle socks slide down and wedge uncomfortably under my heel.  I also had a suspicion that they weakened my ankles.

I really didn’t like the idea of purchasing expensive “proper” baby shoes, when the same money could be used to purchase some soft-soled shoes like moccasins or canvas sneakers, and still have enough left over for a month’s worth of diapers.  When I mentioned this to my sister-in-law, who was studying to be a nurse, you would have thought that I had just prescribed crippling my own child.

Sure enough, a couple of days later, my mother-in-law (God rest her soul) called, outraged and crying because she was so upset.  Lisa had told her I refused to let my baby wear shoes.  I was clearly Barbarian-of-the-Month.  Now, I had not said I was refusing to buy shoes, only that I didn’t feel it was necessary to spend a great deal of money on those awful, foot-crunching “baby shoes.”

In the end, because I was a young mother (19), and had not yet learned to trust my own instincts and stand up for my point of view, the baby ended up with those shoes. (Although I only put them on her when the in-laws were around.)

Then in the 1970s, the running craze began. And the shoes soon followed.  Big, ugly, clunky, lumpy-looking running shoes.  And like the baby shoes, expensive. Ugh.

These days, I find I have trouble with my own feet.  My intuition tells me that it was from years of wearing high heels—the most unforgiving of shoes ever invented.


But they were sexy and I was a cocktail waitress and I made good money in those heels.  Today I am paying for it with plantar fasciitis, falling arches and lots of foot pain, as well as trouble with my lower back, hips and knees.  I also suspect that those high heels that women are taught to adore are really a kind of hobbling—like the foot-binding of old Japan—a way to keep women from running, and to make them into sex objects, causing what is now being called “Barbie feet.”

In spite of the biological reality, this year's fashion in shoes remains appalling.

Ladies, please take note.  One of the main causes of plantar fasciitis is the “elevation of the heel” which shortens the connective tissues especially the ligaments, of the foot and heel.  They may be fun to wear once in a while, but if you are young and still have good feet, stop wearing heels as a daily exercise.  Corporate dress code be damned.  (I think you should lose the bras, too, but that is another rant.)  Wear shoes that let your feet be as real and natural as possible, the way that evolution and God (yes, I believe in both) intended.  A million years of evolution can’t possibly be wrong.

Allowing your feet to do what they were made to do (boots were not really made for walking), will also help you to energetically reconnect with the earth, to stay grounded and better process and release negativity.

Today research is showing that shoes of all kinds are doing real damage to the human foot and that the best and most natural way is to be as close as possible to barefoot. Check out this link about running barefoot:

According to Dr. Robert A. Kornfeld, the founder of the Institute for Integrative Podiatric Medicine, said in the Huffington Post, “the prevalence of foot and ankle problems has skyrocketed over the past three decades.”

Maybe from all those awful shoes.