One of the things that has been on my mind lately is the idea of spiritual freedom.

And indeed it is this idea that led me to the concept of “embrace the woo-woo.”

It was triggered by a story I heard from a friend.  Wendy is a spiritual medium, and a very good one.  Her connection to Spirit is very pure and refined and her reading for me a few weeks ago has made a big difference in my own gifts.

Wendy was doing regular readings at a spa near her home.  She has known the owners for years and has been doing this for some time.  That is, until one of the patrons of the spa—an influential Christian pastor in an evangelical church—threatened to ruin the business if they didn’t rid themselves of this woman who was clearly doing the Devil’s work.  The owners caved and asked my friend to kindly stop her practice—which was the sole means of income for this single mother.

I was outraged.  First of all, this kind of ignorance of spirituality that does not follow an organized institutionalized form of religion as being “of the Devil” is a dangerous superstition directly out of the Dark Ages.  It is right up there with the idea that women are the source of original sin and are therefore evil and inferior.

And second, no other practitioner of a “recognized” religion could be forced out of work based solely on their religious convictions.  It is clearly a case of discrimination.  And a virulent one at that.

The United States is supposed to be a nation of religious freedom—but it seems that it is only a nation of religious freedom for those who belong to organized religions like Christianity or Judaism.  Buddhism is recognized.  Native American religions had to fight for recognition not too many years ago.  Jainism and the Ba’hai faith are viewed with little suspicion.  Current prejudice against Moslems is at the very least protected under the law, but the prejudice against sole practitioners of direct experiential spirituality is rampant and tolerated.  In fact, New Agers, Wiccans, Druids, shamanic practitioners and others are often mocked, derided, and scorned.

Express a belief in reincarnation at the office, or admit to the checkout girl at the grocery store that you practice astrology, and you will be given the cold shoulder, subjected to eye-rolling and whispers behind hands to co-workers.  Freak.  Nut.  What, you believe in all that woo-woo stuff?

So, following the example of the homosexual community in the 1970s and 80s who embraced the derisive epithet “gay” and made it their banner, I openly declare that I now embrace the woo-woo.

It is time for those of us in the New Age community (we could use a better term than New Age—a more inclusive term) to stand up for our spiritual freedom, and demand the same respect for our beliefs and our rights to dignity as anyone else.  I exhort all persons who follow a personal and direct spiritual relationship to the Divine to consider that they must begin to stand up for their rights.  (One friend called it coming out of the broom closet.) 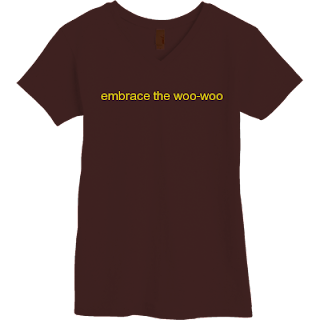 (If you want to tell the world that you are in favor of personal spiritual freedom, T-shirts are available at this link:  http://woo-woo.propellshops.com).
Posted by Unknown at 11:13 AM